We visited Lee's Ferry (Arizona) in late July as our launch point to float down the Grand Canyon for 16 days. An excellent series on the trip appears here: Geotripper (Garry Hayes). During our July visit we had torrential downpours--some of the best we have seen, and having lived in Phoenix area for 17 years we had seen our share. Frankly, I though it was some of the heaviest rain that an area like that would see for quite some time. Here is a picture of a small wash creating a new delta near the launch ramp (notice the kayakers that could not resist). See some of the photos on Geotripper to get an idea of just how hard it was raining.

This wash only collected runoff from a small area. This drainage is very localized, look at the Google Earth image. 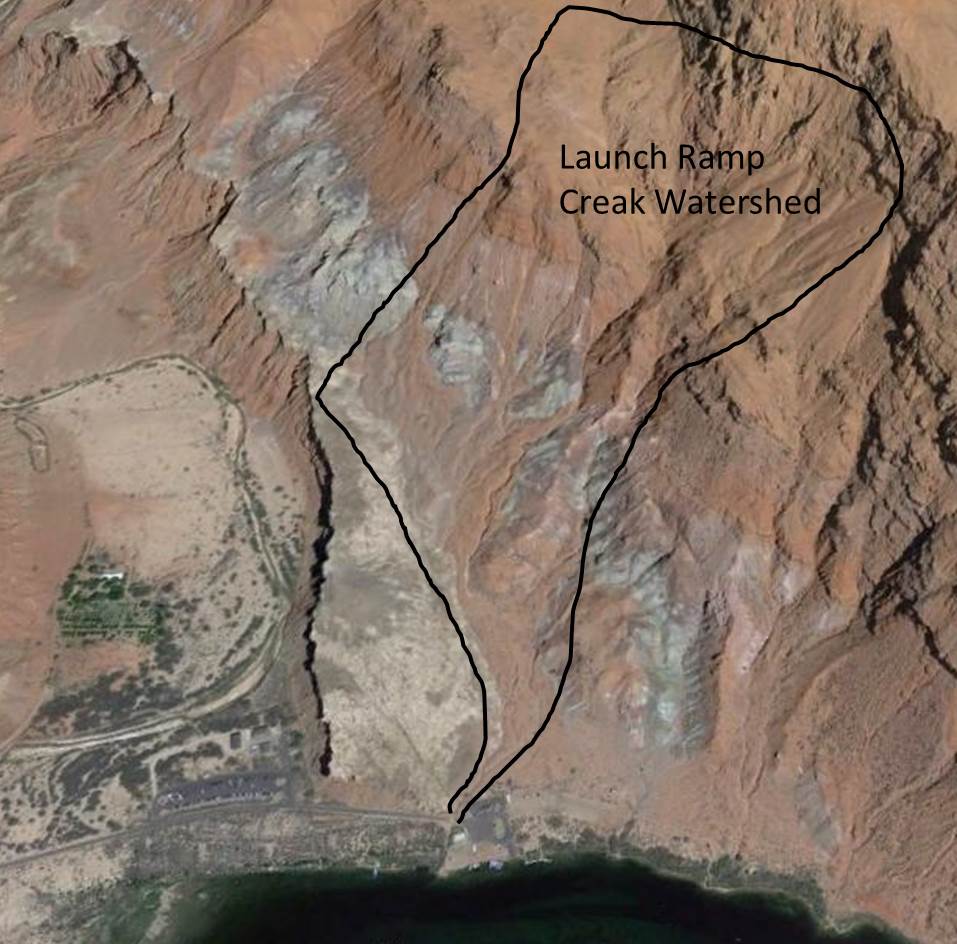 This is the delta that was formed that day, some seven weeks later (mid September). 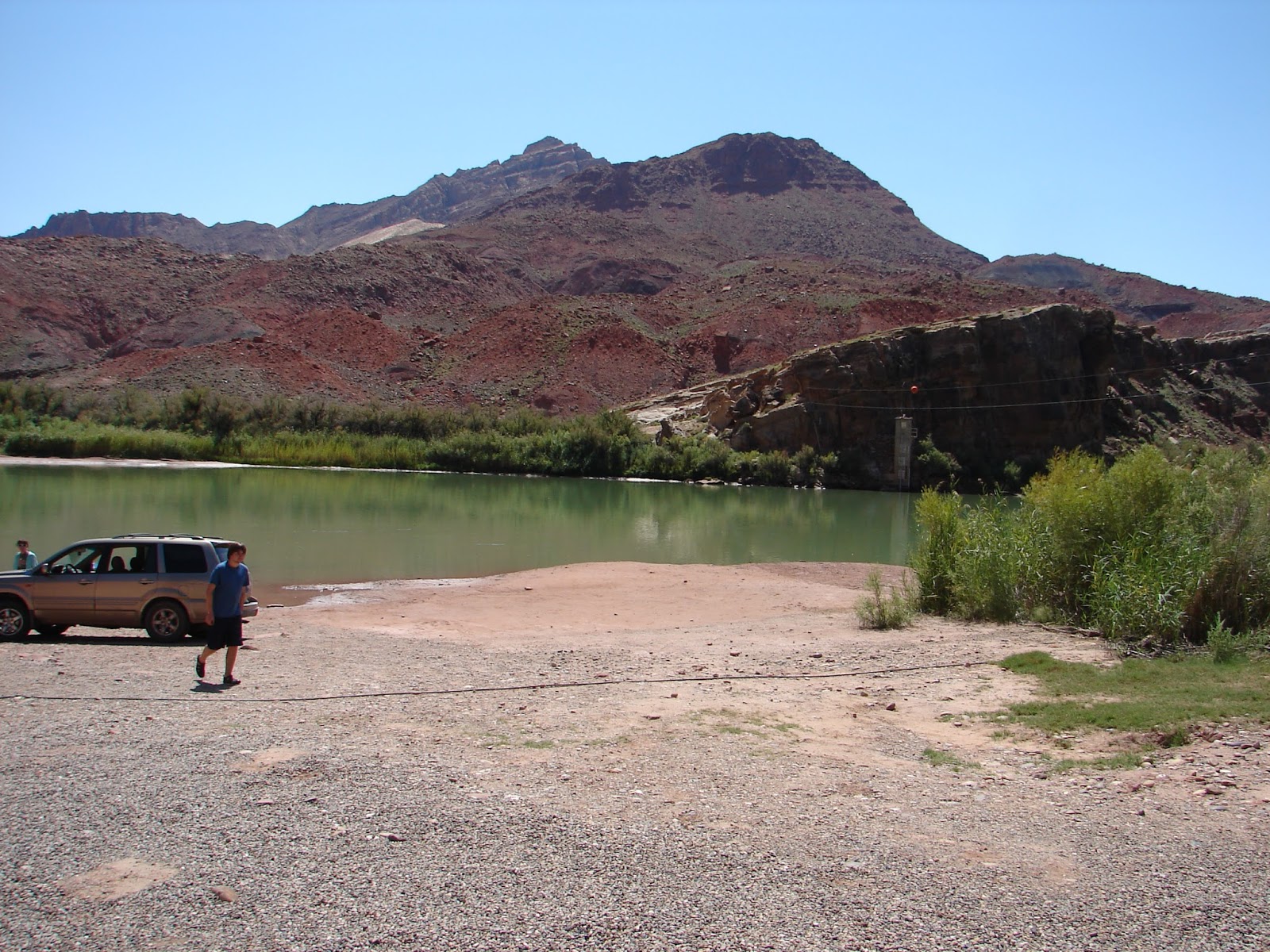 However, much more impressive and the real focus of this blog are the three washes that cross the Lee's Ferry road after it splits off from the main highway (89A) at Marble Canyon: Cathedral Wash, "Small" Canyon Wash and Campground Wash ("Small" Canyon's name is questionable--the only information I could find was a photograph on Google Earth). This entire road was being rebuilt (as a routine event, I presume) and was only gravel when we were there in July. All the wash crossings were brand new, new culverts and levies. Now the road was basically complete, paved, curbing and new point-of-interest signs. To get an idea how much bigger the drainages are for these three, here is an illustrated image. The smaller Launch Ramp wash watershed is shown in gray highlight in upper right corner for reference. 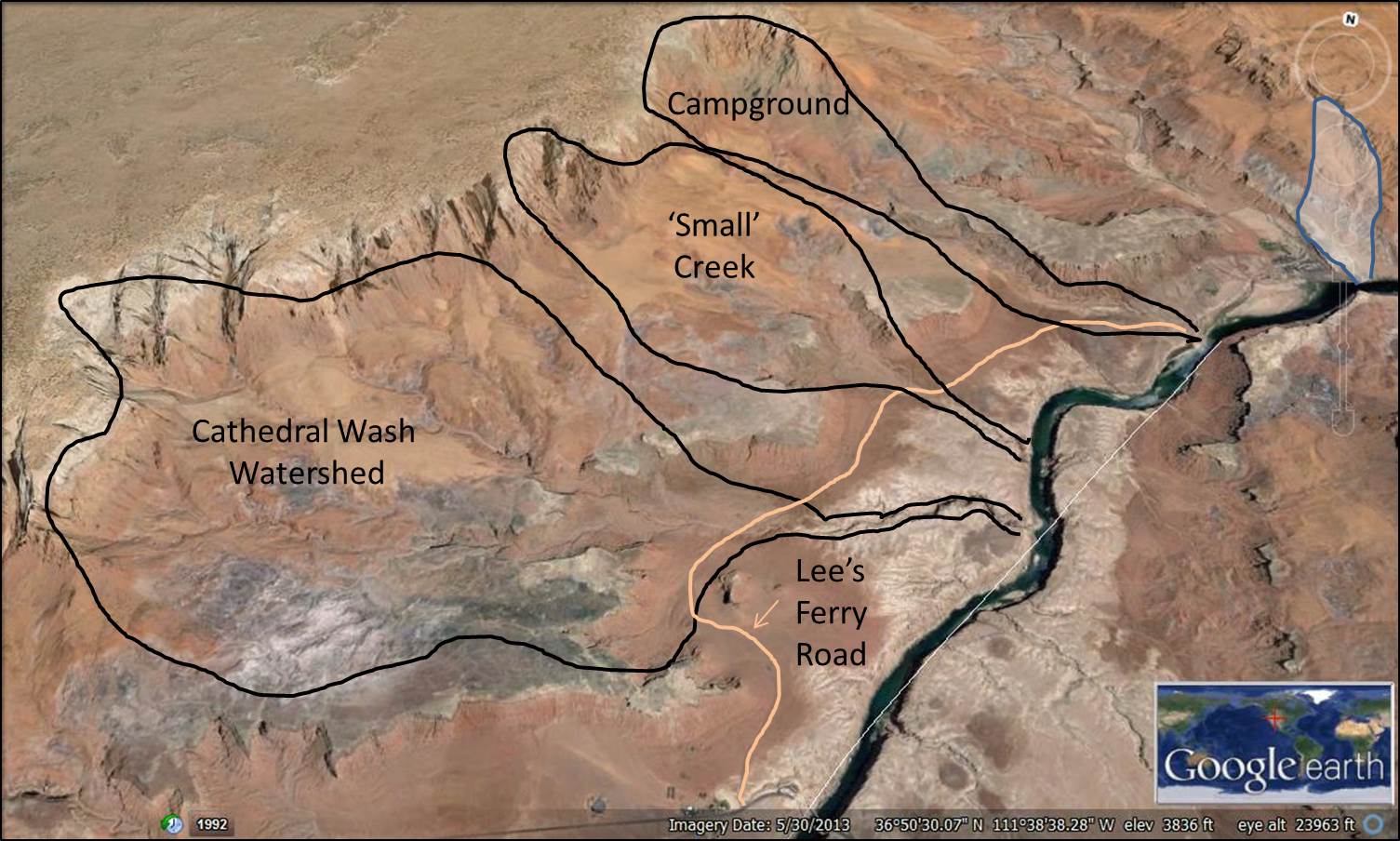 Apparently the storm which caused all the problems in Colorado left a few scars in Arizona. When we got to the first wash crossing, Cathedral, a flash flood and debris flow had completely over-washed the road for several hundred yards, even though the culverts were still open and had obviously had a large flow through them (we found out later that it happened at 4:30 PM, September 10th). Sand had built up across the entire area, but was not all that noticeably bad. In hindsight--and when we left--we noticed a very large number of very large 'fresh' rocks throughout the flood zone--white, battered, red with scrapes, etc. Some the size of a Volkswagen.

The next crossing was in much worse shape. Boulders half the size of our SUV has block one of the large culverts and the flood pretty much covered the entire area. Here is a shot from Google Earth during the construction. 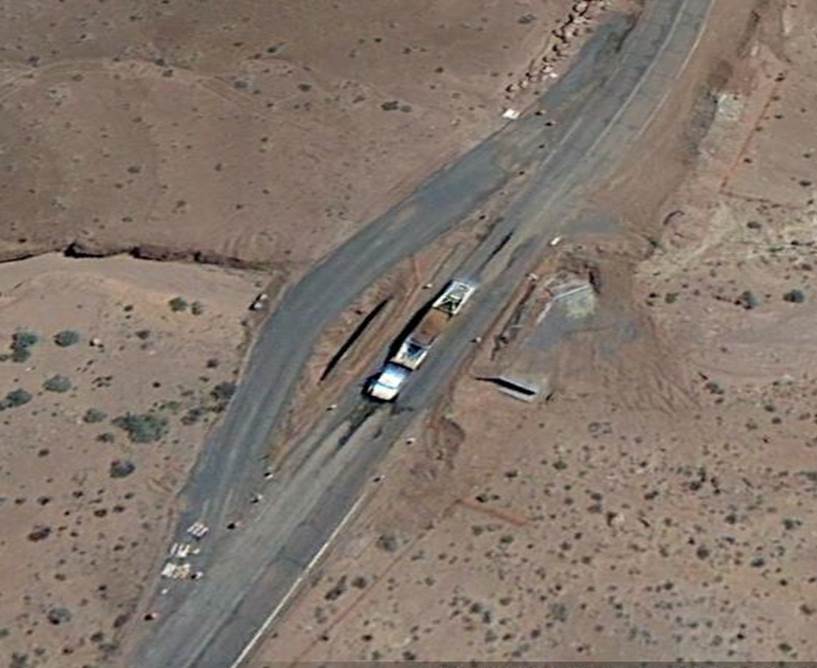 And here is how it looked last weekend. It had been completely repaved before this event. 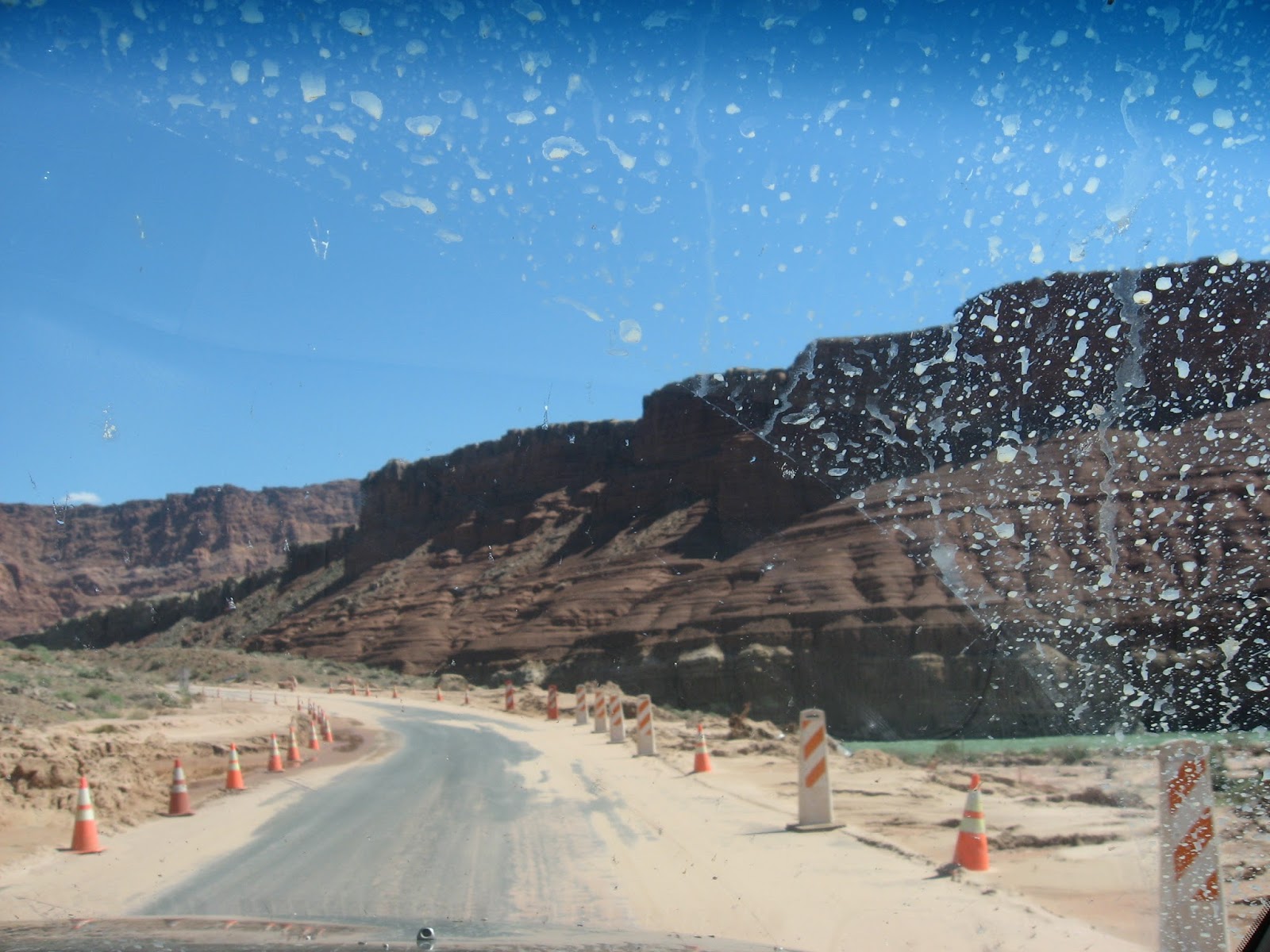 The road was basically okay, even for all the high water and debris.

The Campground wash seemed to have had the highest flow and it enters the Colorado river at Paria Beach. It is the debris field which causes the 'Paria Ripple', the first opportunity to get wet floating down the river (and, amazingly, another group's boat flipped there). It turns out that while the Paria River certainly has a much, much larger watershed, the slope of the river is too gentle to transport significant boulders and such to the Colorado River. 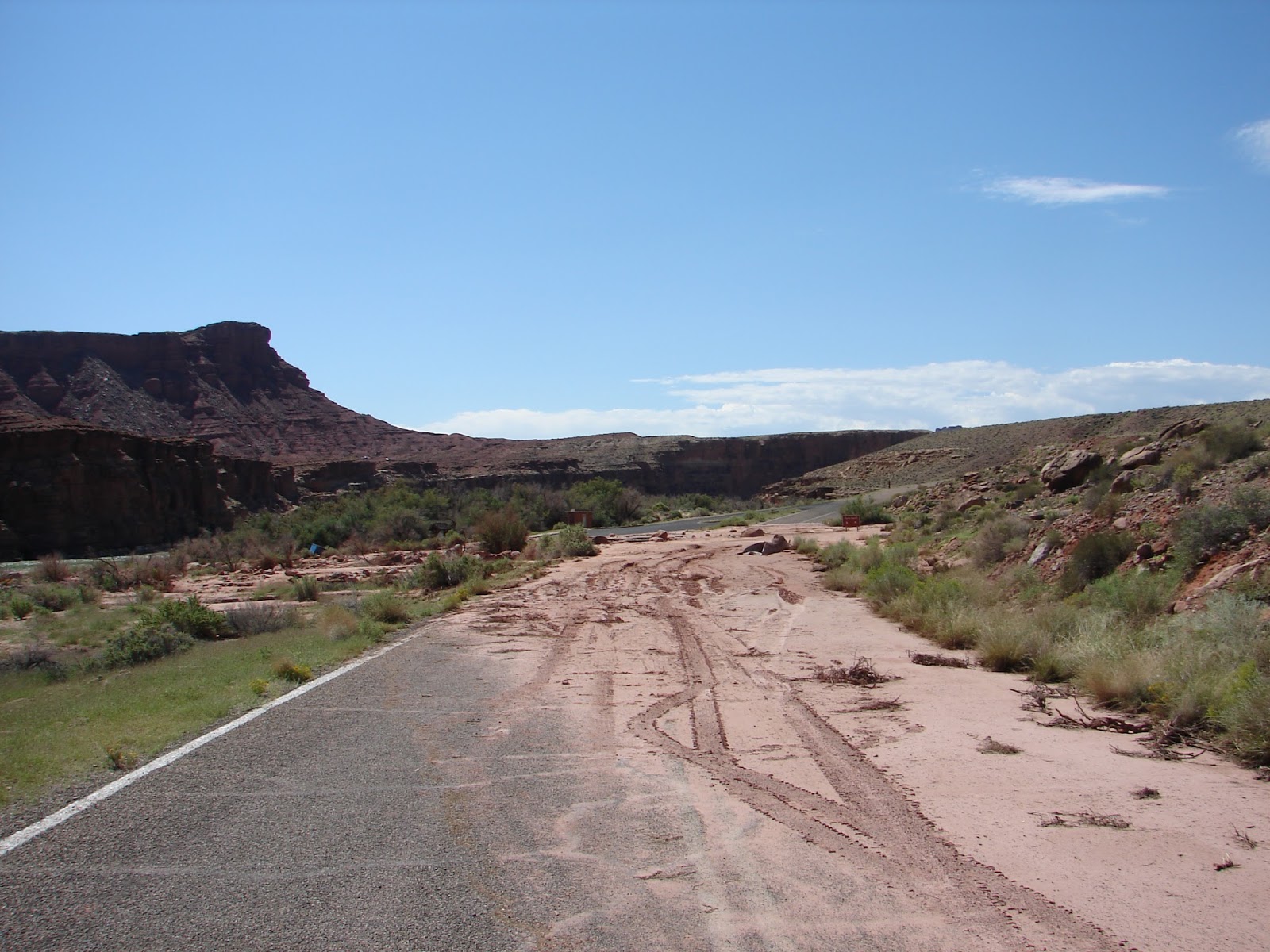 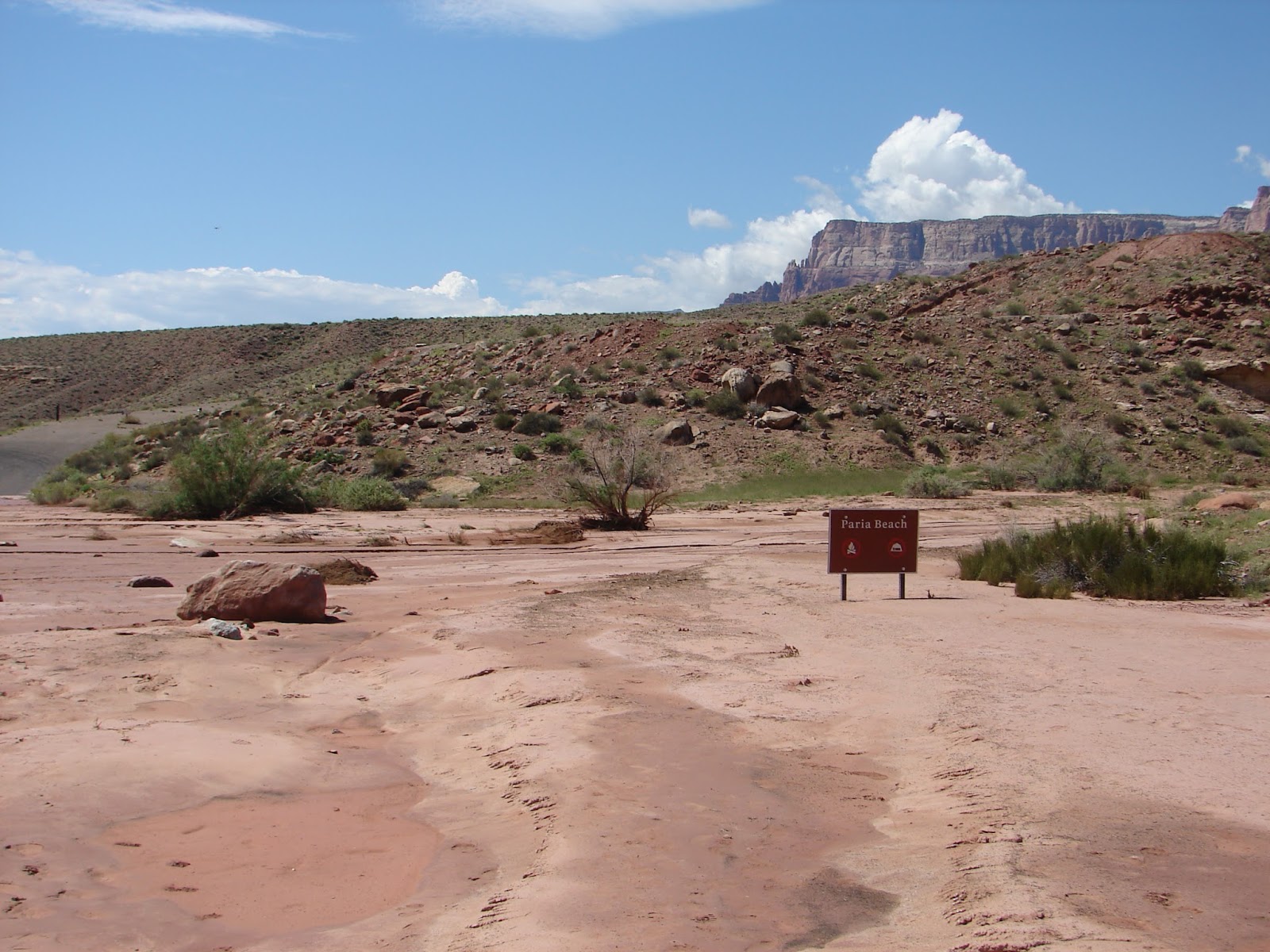 The entire area was under sand and rocks. Big ones, too. Do you see the one in the above picture sitting in the middle of what was the road and the parking lot? The culverts here were clogged and the entire flow over-topped the road. You can see the exits of the culverts, where the entrances are clearly buried. 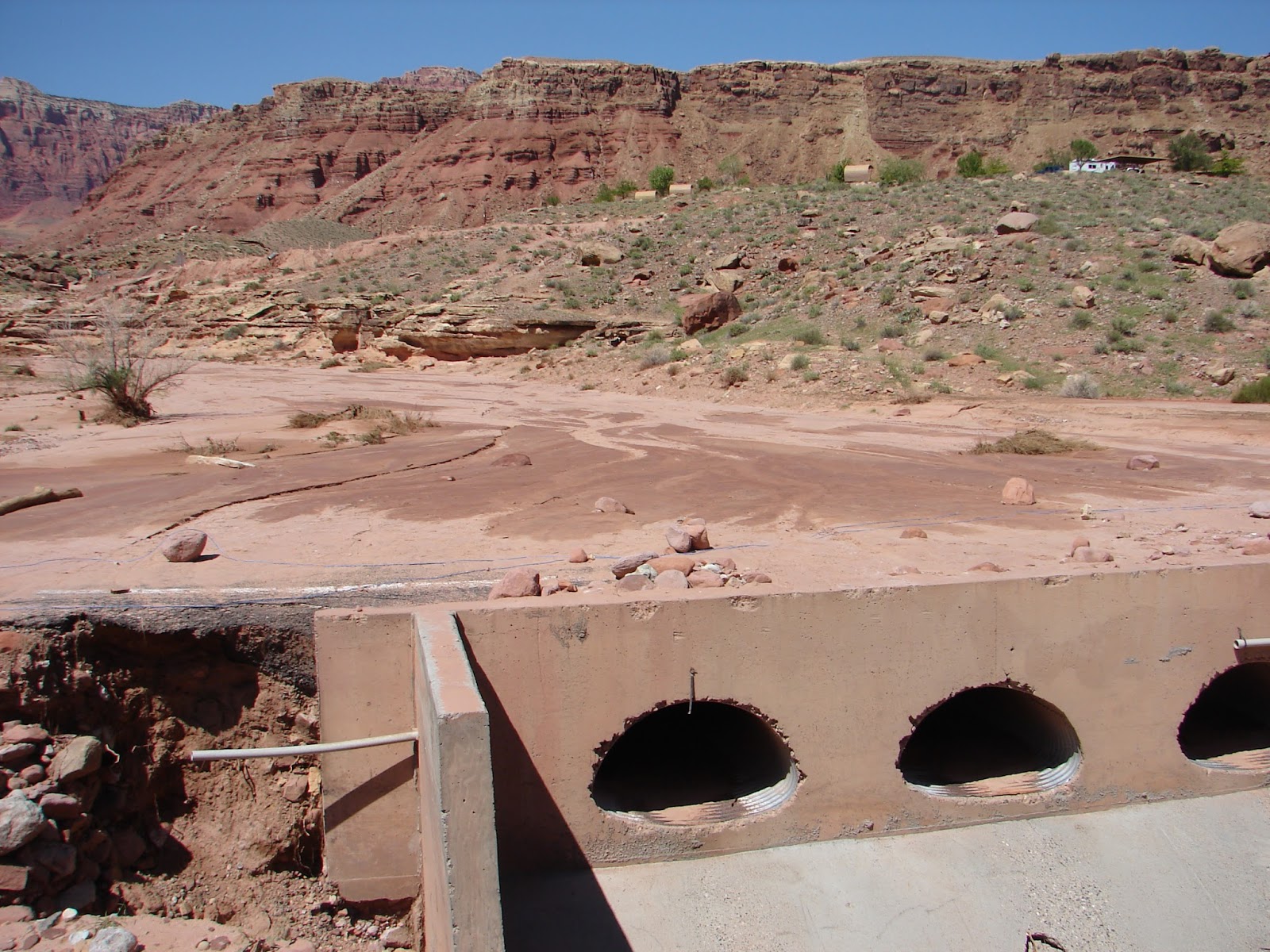 The flood had removed all the vegetation and deposited a huge new boulder field with plenty of the new white rocks mixed in. When we visited the area earlier in the summer (early July), we walked on this beach. It did have boulders, but they were largely buried in deep soft white, very hot, sand. It was impossible to tell how many 'new' boulders were deposited. However, the vegetation definitely got the short end of the stick. Here is a photo from their informational board showing how the delta looked prior to the flood. The blue oval is where the picture of Sam and Carol was taken, right in the middle of the delta (notice the large blue trash container). The area had been wiped clean. 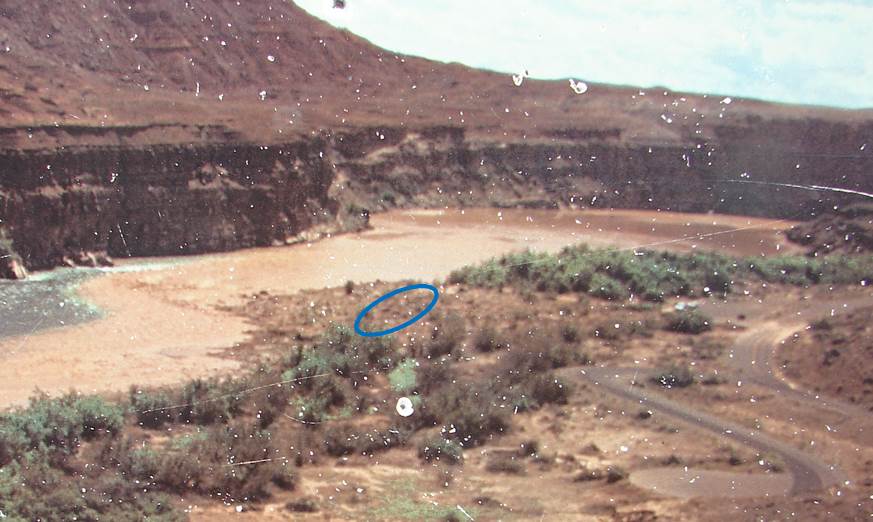 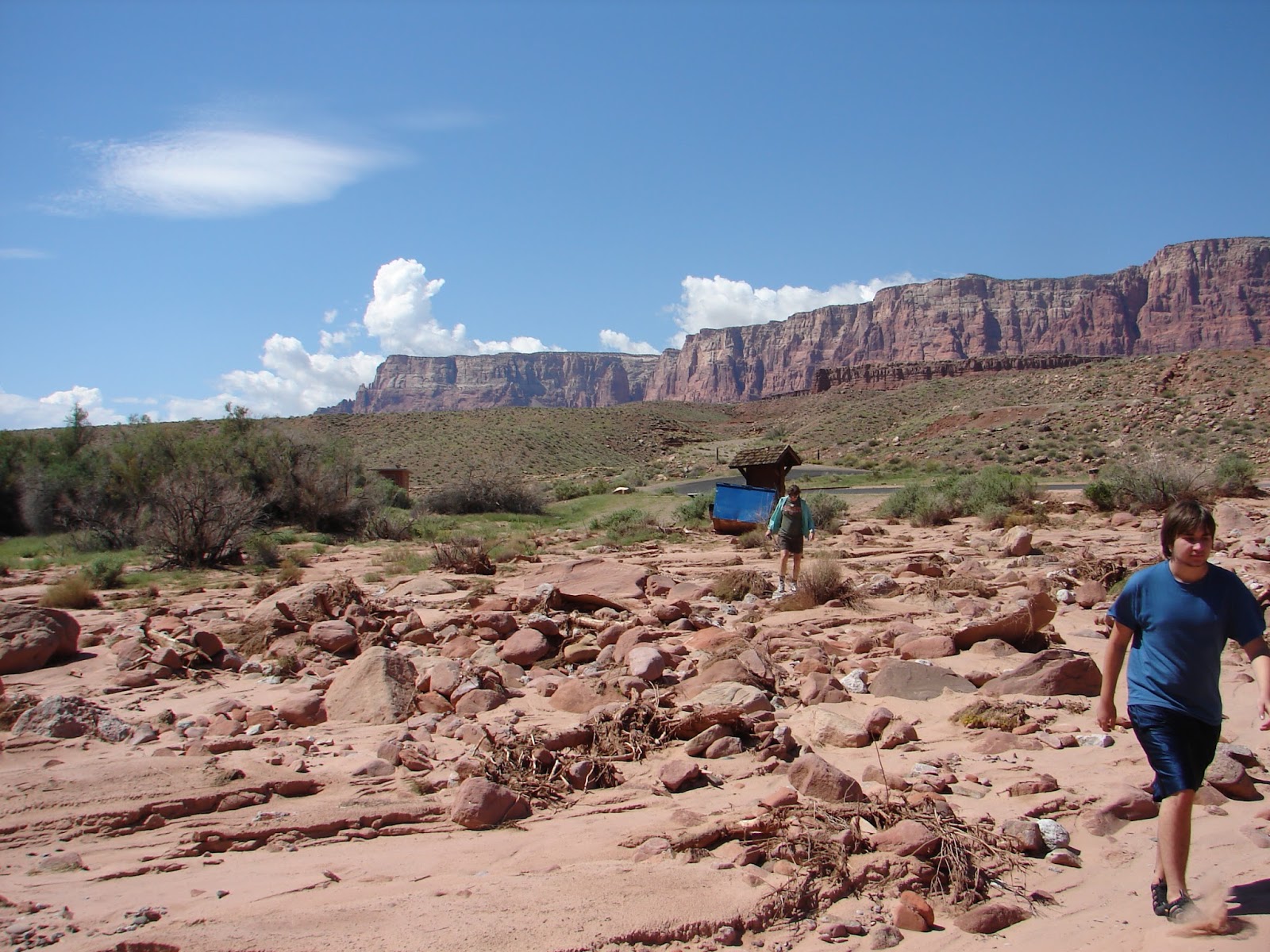 It was hard to tell if the delta had grown or had significantly changed the Colorado River, but the beach down stream appeared to have gotten much bigger. Here is a Google Earth image from before: 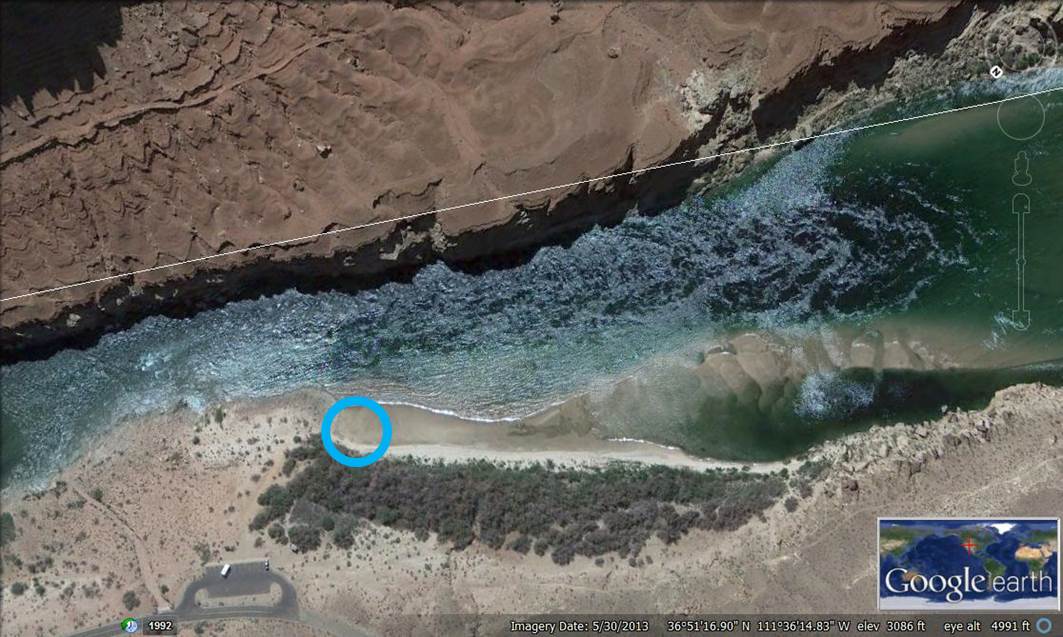 The pictures below (upstream and downstream) were taken from approximately the blue circle in aerial view. 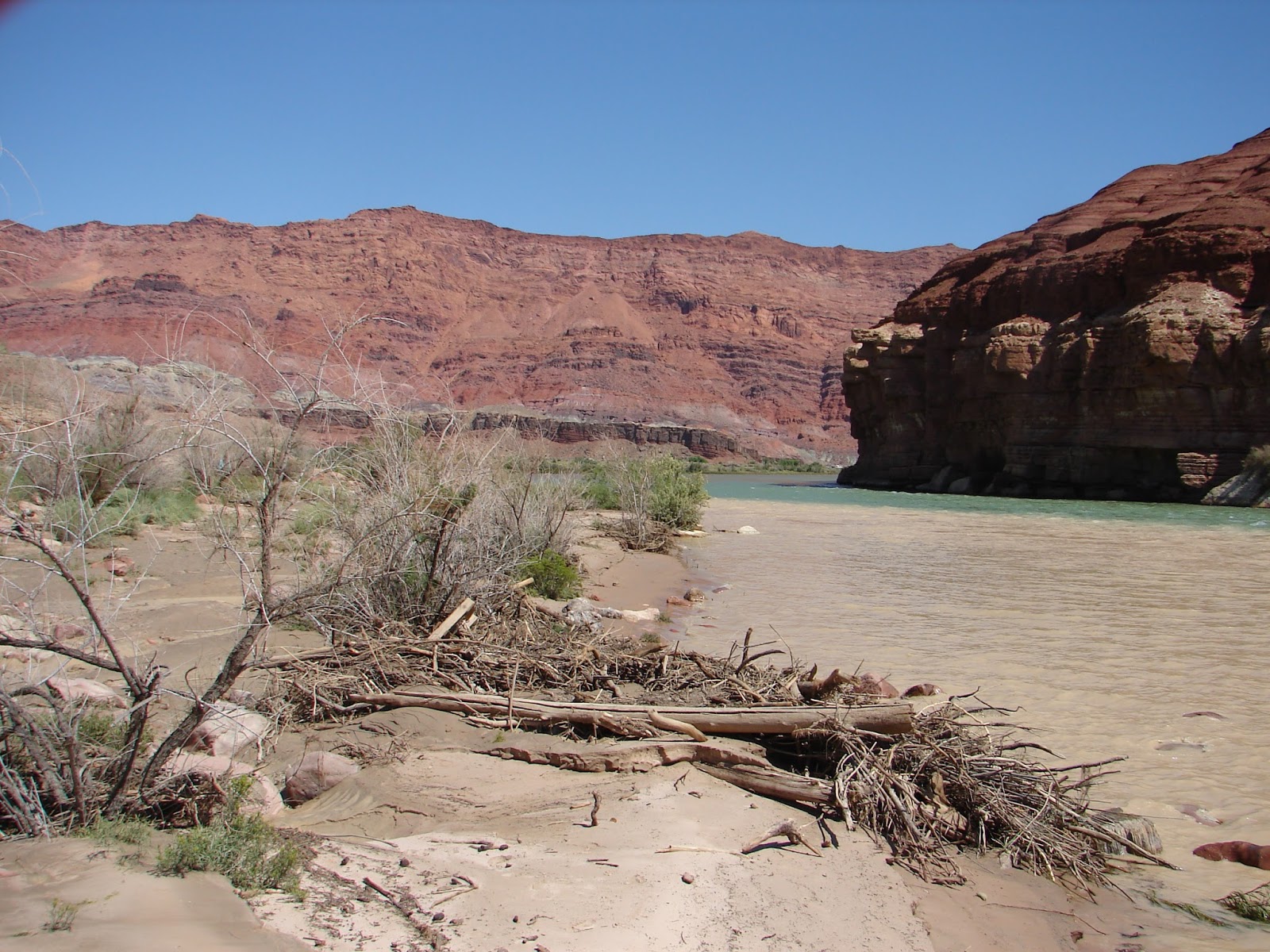 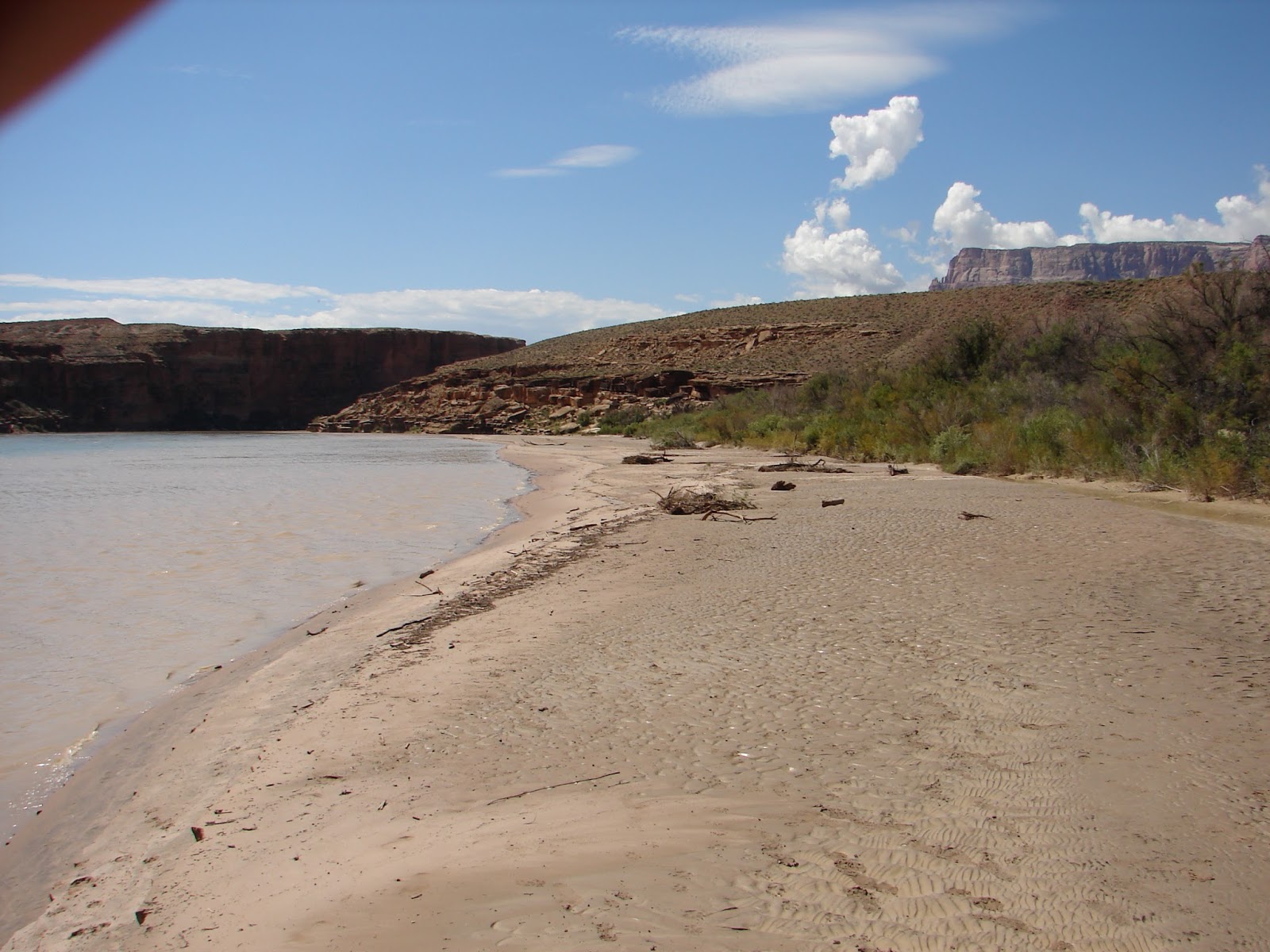 I have always loved to sing.  I played guitar a lot in junior high and high school and into college for a while. I certainly enjoyed these activities, but nobody within earshot did (besides my mother, of course).  What can I say; my friends and family were honest. I learned a good, perhaps negative, lesson from this: sharing can be pretty darn painful and while I might enjoy something, others may not.  Unless I am pretty darn good at something, I am not going to ‘share’.  Fast forward a lot of years, and while, ironically, I now make a living writing professionally (technical science), I had a similar experience with writing as I did with music.  My early attempts at writing, in school, early jobs, letters, etc., met with similar reviews to my music making. It left me feeling that writing (or singing for that matter) would the last way I would be sharing my life and stories with people.  I do pretty well at live presentations and one-on-one conversation and have published a number of technical papers along with hundreds of public presentations.  However, now we live with ‘blogs’, which I just found out yesterday, is a contraction of web log, go figure.  I have a lot of conversations with friends, colleagues, and family, all interesting and very appreciated. These inevitably lead to the modern question of ‘do you have a blog?’ followed by the statement ‘you should have a blog’.  My overall predicament is exacerbated by comparing myself to my brilliant, funny and talented immediate and extended family putting our superb blogs and web presence (Garry, Carolyn, Sue). I don’t want to embarrass myself anymore. The situation is further complicated my short attention span/ interest in a wide variety of topics. I have never been able to focus on a single ‘thing’. I have my hard core science topics, along with interests in the great outdoors, family, exercise, hobbies, politics, nature, etc.—I don’t know how to focus a blog. All for now, for those of you that actual read this—I hope this helps.
Posted by lostmark at 11:12 PM 2 comments:

My cell phone has a good sense of humor. I recently purchased a Droid 2 after much, much pestering from my seventeen year old (now eighteen). Near as I could tell, it was so that he could see the new features on the Droid 2 versus his almost new Droid 1. I am clumsy with the new smart phones--I was very comfortable with my Blackberry w/ a physical keyboard. My new phone has a mind of its own because of my apparently clumsy fingers and it keeps asking me for 'voice commands'. It seems every time that I try to go to the home page, it asks for a voice command. My family has witnessed my clumsiness and cluelessness many times. This evening, with my youngest son and wife sitting in the room, I told my phone to 'go to hell'--it immediately replied in a loud clear voice, 'which short cut'.
Posted by lostmark at 10:26 PM 1 comment: